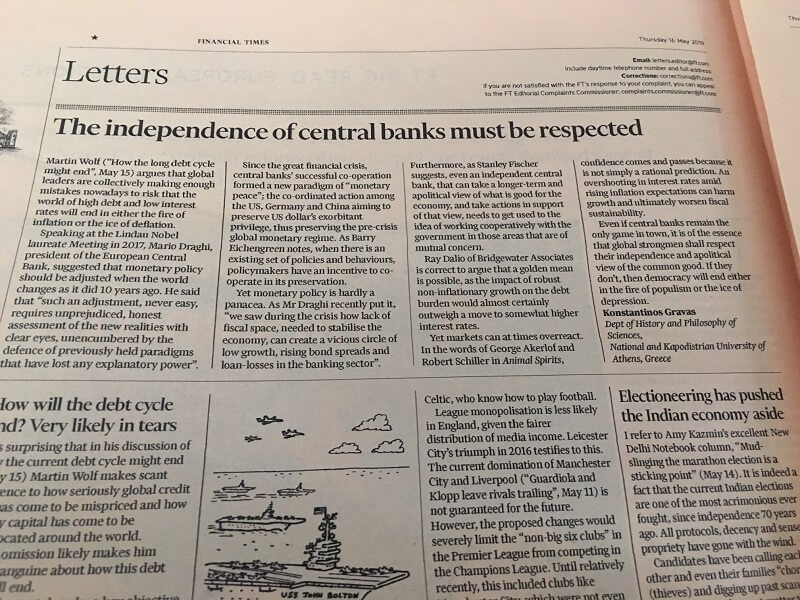 The independence of central banks must be respected

From Konstantinos Gravas, National and Kapodistrian University of Athens, Greece

Martin Wolf (“How the long debt cycle might end”, May 15) argues that global leaders are collectively making enough mistakes nowadays to risk that the world of high debt and low interest rates will end in either the fire of inflation or the ice of deflation.

Speaking at the Lindau Nobel laureate Meeting in 2017, Mario Draghi, president of the European Central Bank, suggested that monetary policy should be adjusted when the world changes as it did 10 years ago. He said that “such an adjustment, never easy, requires unprejudiced, honest assessment of the new realities with clear eyes, unencumbered by the defence of previously held paradigms that have lost any explanatory power”.

Since the great financial crisis, central banks’ successful co-operation formed a new paradigm of “monetary peace”; the co-ordinated action among the US, Germany and China aiming to preserve US dollar’s exorbitant privilege, thus preserving the pre-crisis global monetary regime. As Barry Eichengreen notes, when there is an existing set of policies and behaviours, policymakers have an incentive to co-operate in its preservation.

Yet monetary policy is hardly a panacea. As Mr Draghi recently put it, “we saw during the crisis how lack of fiscal space, needed to stabilise the economy, can create a vicious circle of low growth, rising bond spreads and loan-losses in the banking sector”. Furthermore, as Stanley Fischer suggests, even an independent central bank, that can take a longer-term and apolitical view of what is good for the economy, and take actions in support of that view, needs to get used to the idea of working cooperatively with the government in those areas that are of mutual concern.

Ray Dalio of Bridgewater Associates is correct to argue that a golden mean is possible, as the impact of robust non-inflationary growth on the debt burden would almost certainly outweigh a move to somewhat higher interest rates.

Yet markets can at times overreact. In the words of George Akerlof and Robert Schiller in Animal Spirits, confidence comes and passes because it is not simply a rational prediction. An overshooting in interest rates amid rising inflation expectations can harm growth and ultimately worsen fiscal sustainability.

Even if central banks remain the only game in town, it is of the essence that global strongmen shall respect their independence and apolitical view of the common good. If they don’t, then democracy will end either in the fire of populism or the ice of depression.

Konstantinos Gravas
Dept of History and Philosophy of Sciences, National and Kapodistrian University of Athens, Greece